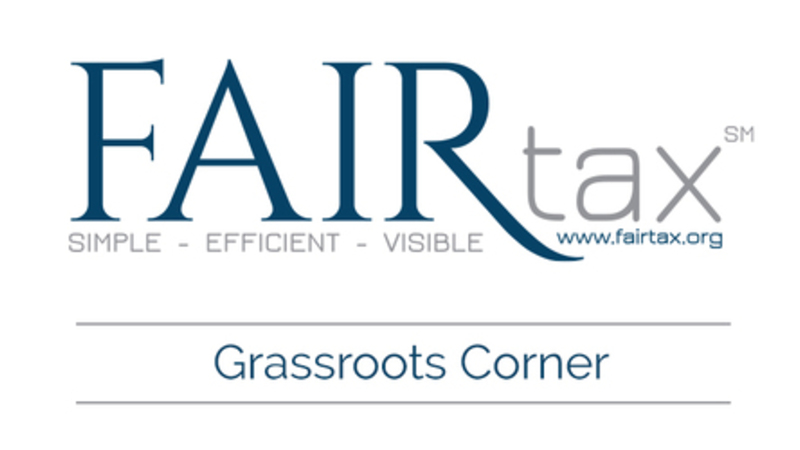 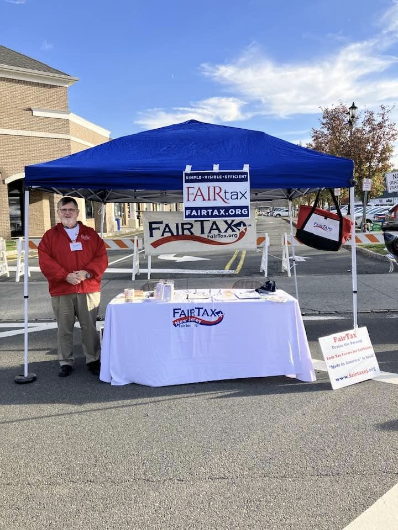 Now that we are in the dead of winter, we look back on activity over the previous year. On October 30, 2022, we had a FAIRtax table at a street fair in New Providence, New Jersey.

The day's highlight was a visit to the fair by incumbent Congressman and Congressional candidate Tom Malinowski. Jim Bennett handed the Congressman a FAIRtax pledge form that the Congressman agreed to “look at.” Although we never heard back from the Congressman, his disregard for our movement turned out to be a significant mistake. Malinowski lost his bid for reelection to Congressman-Elect, Tom Kean, who has read The FAIRtax book. Just imagine the outcome if Malinowski had signed the pledge!

We handed out about 100 pocket cards with contact information, and there were other items of interest at the table. Several fair-goers engaged us in in-depth conversation.  We don’t know how many of the people we talked to went home and visited our website.  We’d love to have some statistics on that, however, we’re satisfied that we were successful in spreading the word.

One should note that Neal Boortz’s talk show was never carried in the New Jersey media market.  Consequently, very few people here know about the FAIRtax independently of us. The culture and political climate here differ from other parts of the country, and we’ve had to adjust our message accordingly.  Following the lead of Florida State Director Paul Livingston’s “sticky messages” group, we highlight taking control of one’s taxes. We also talk about eliminating the IRS, but that’s not our primary message. This adjustment makes our message more credible.

Without a massive advertising budget, having a presence at street fairs is a cost-effective way to advertise the FAIRtax.  In many cases, all it costs is the time that the volunteers put in.

Let me know if you have any activity in your state to spread the word.

🇺🇸   Call For Pictures & WriteUps - When others see your activity, they are inspired, the process snowballs and Representatives, Senators and, yes, even the President start to listen to you and me. Please send your material to me at Jim.Bennett@FAIRtax.org.

🇺🇸   We've Got You Covered, If You Let Us Know - If you are planning an event, we have event insurance coverage available for you. Email me the "who-what-where-when" and I will obtain for you a COI. Once the event is underway, it's too late.