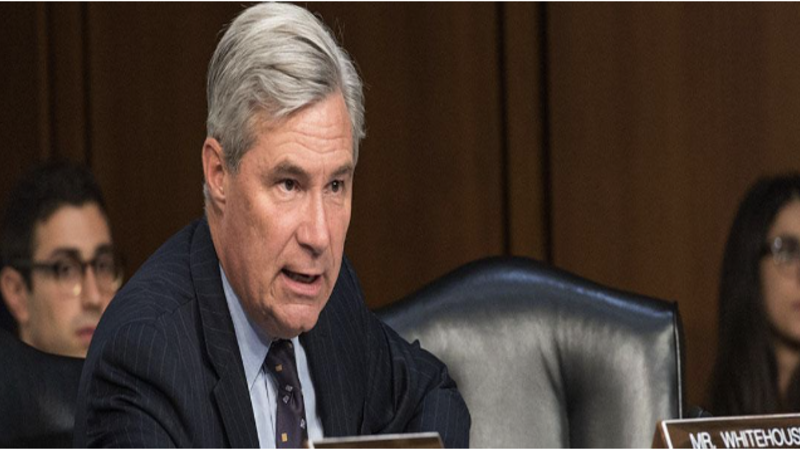 The arrogance of many in D.C. who believe that only they are smart enough to determine what is best for us is well known.  Likewise, the idea that they will try to use the IRS to reward their friends and punish their enemies is not “news’’ to anyone either.

An article published by the Daily Signal provides yet another reason why the Ruling Class fights so hard to keep the IRS and the income/payroll tax system and why THE IRS MUST GO!

The correspondence also clearly exposes the real reason why so many in D.C. supported hiring 87,000 new IRS agents.  Whether it’s making life miserable for their political opponents or trying to punish anyone who would dare object to being told what’s good for them, they see those new agents as 87,000 more foot soldiers who will obediently do their bidding.

Here are some of the points covered in the article:
The simple truth is that Whitehouse and other Democrat senators are asking that politically active tax exempt groups with whom they disagree or who dare question them be denied tax-exempt status.

Fortunately, outgoing IRS Commissioner Charles Rettig has refused to provide the Senator with the data he requests or take the actions he requests.

Rettig said, “Section 6103 of the Internal Revenue Code protects the privacy of tax returns and tax return information of all taxpayers. Therefore, we cannot disclose any actions we may or may not take on this information.”

Rettig’s response letter goes on to say that unauthorized sharing of tax information could be illegal:

“Congress has not authorized the IRS to enforce campaign finance laws. In addition, Section 6103 of the Code strictly limits the IRS’s ability to share tax information with other federal agencies. Accordingly, the IRS cannot disclose any names or addresses of substantial contributors to other federal agencies for non-tax investigations, including campaign finance matters, except in very narrowly prescribed circumstances. Unauthorized disclosures may lead to civil and criminal liability.”


No one will dispute that the federal government must be funded.  There can be honest disagreement on how much funding it needs or how that money should be spent, but no one denies the need to fund the government.

If the income/payroll system was the only way to fund the government, then it follows that everyone would have to accept the need for an agency like the IRS to administer and enforce the tax laws.

But the income/payroll tax system is NOT the only way to fund the government.  There’s a much fairer, much simpler and much more efficient way to do it —THE FAIRTAX!

There are no tax returns to file and no records to keep.  We pay our federal taxes when we make retail purchases of new goods and services.

The elites in DC know this, but they stubbornly refuse to replace the income tax with the FAIRtax because they know that when the FAIRtax is enacted:
No one can really argue with the statement made in 1887 by Lord Acton, Power tends to corrupt, and absolute power corrupts absolutely.

Will the FAIRtax eliminate all of the arrogance and corruption of the Ruling Class and their minions in D.C.?  No, but it will deprive them of one of their most powerful weapons that they use in their never ending quest for money, power and control.

The FAIRtax will allow us to TAKE BACK CONTROL.

The income/payroll tax system is broken and no longer working—we can’t repair it but we can replace it with the FAIRTAX!

Join us and TAKE BACK CONTROL OF OUR COUNTRY AND OUR LIVES—NOT WITH BULLETS BUT WITH THE ELIMINATION OF ONE OF THE BIGGEST THREATS TO OUR LIBERTY AND ECONOMIC PROSPERITY—THE INCOME/PAYROLL TAX.

We all should remember Edmund Burke’s warning that applies to our efforts to TAKE BACK CONTROL,

“Nobody made a greater mistake than he who did nothing because he could do only a little.”

We should also remember this quote from George Orwell's 1984, which, if we do nothing, may foretell your and your children's future:

“If you want a picture of the future, imagine a boot stamping on a human face—forever.”

WHAT CAN EACH OF US DO?

We can write letters and make calls to our elected representatives and attend Zoom town hall meetings demanding that if they really want to allow Americans to “TAKE BACK CONTROL”, the first step is to eliminate the income/payroll tax system and enact the FAIRTAX!

TAKE BACK CONTROL!   Help us PASS THE FAIRTAX!

The IRS will be gone and we will pay our taxes when we make purchases.
WE and not the Ruling Class and their minions in D.C. will decide how much federal tax we pay!

WE will know how much tax we and everyone else are really paying because taxes will no longer be hidden from us.  It will be clearly shown on every retail receipt.

If you have friends who don’t know about the FAIRtax, send them to FAIRtax.org.  Have them watch the white boards under “How It Works” and, if they agree, ask them to please join us.

Then contact your Members of Congress and the President and demand that Congress pass -the FAIRtax—the only fair tax.

Is it hopeless?  When confronted with a seemingly impossible problem, remember the statement attributed to the author George Bernard Shaw who wrote, You see things; and you say “Why?”  But I dream things that never were; and I say “Why not?”

By contributing (investing) $10.40 per month, you help provide a financial base to AFFT.  If you can make larger contributions (investments), these will be used not for salaries, as we are all volunteers, but for the needed updates to our economic studies which will be vital for all future years.

Please go to this link to invest in AFFT and in your and your family’s future.
#StoptheShutdown Press Conference with Speaker Pelosi and Senator Schumer by AFGE is licensed under flickr Attribution 2.0 Generic (CC BY 2.0)