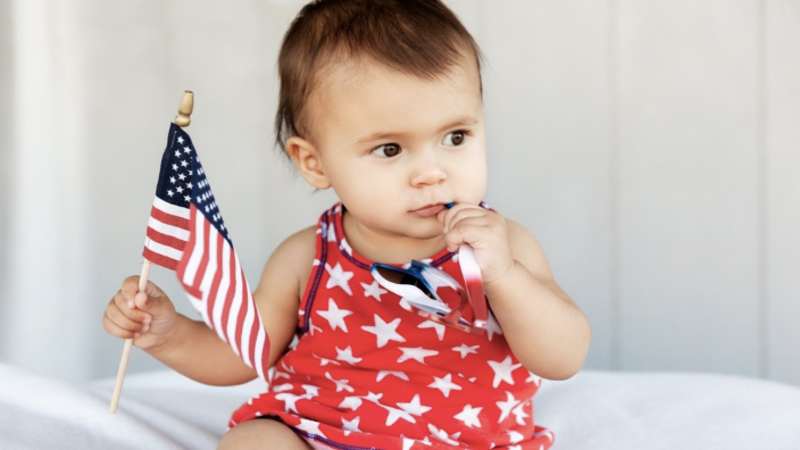 
Rather than have a picture of fireworks or picnics or other activities usually associated with the 4th of July, it seems that we should remember why many of us have persisted in the effort to replace the federal income tax with a national retail sales tax—the FAIRtax.

We are persisting not because most of us will realize much of the benefit of freeing our citizens from the yoke of the federal income tax, but because we want future generations, like the baby in the picture, to have a chance at a better and freer life.

We meet many obstacles and sometimes we feel like Sisyphus must have felt.  Sisyphus offended Zeus, the ruler of all the gods on Mount Olympus.  As punishment, he was not killed, but instead, was banished to the underworld and forced to roll a boulder up a steep hill.  Every time he approached the top of the hill, the boulder would roll back down and he had to start over.  This went on not for just for a few years but for eternity.

Our challenges may seem daunting—we are facing an entrenched Ruling Class that desperately wants to maintain the federal income tax.  Not because it’s a better way to fund the federal government, but because they can use it both to exercise control over us, and also to reap huge profits for themselves and their friends at our expense.

Think back to 1776.  The brave patriots who drafted and signed the Declaration of Independence were in effect telling the king of the most powerful country on earth that he was a tyrant and they would not tolerate his rule any longer.

One of the major reasons for their discontent was England’s attempt to levy taxes and impose other laws on the colonists without their consent.  Obviously, this rebellion against his rule enraged the king.  He vowed to crush the rebellion and punish its leaders.

It took real courage to be a drafter or a signer of the Declaration of Independence.  Almost all of the signers had property.  John Hancock was one of the wealthiest people in the colonies.  He said that when he made his signature larger than the other signers, he wanted to be sure that the king could read it.

The signers knew that they were taking a huge gamble.  They all knew they could have their property taken or destroyed by a vengeful monarch.  They were well aware that they were risking not just their property, but their very lives.  This was just the way that unsuccessful revolts were handled in the 18th century—the losers paid with their heads.

Benjamin Franklin argued that they must all sign and work together because, “We must, indeed, all hang together or, most assuredly, we shall all hang separately.”

However, thanks to the courage, persistence and sacrifices by many Americans, the rebellion was successful and the United States of America was born.

Now no one can realistically say that the fight to free taxpayers from the tyranny of the IRS and the federal income tax is in any real way comparable to the fight to win freedom from Great Britain.  Yes, the IRS may try to attack us and take our property, but at least for now, no one is in danger of losing their lives.

However, we must continue to tell the unwelcome truth or our “rulers” in DC.  The federal income tax is evil and corrupt, and it’s destroying the greatest economic machine ever created.  In the process, it’s also sowing the seeds of a tyranny that is abhorrent to our founding principles.

We must persist for the sake of the little girl in the picture and all the others like her.  Our children, our grandchildren, and all the children yet to be born deserve better than the current income tax system.

Thomas Jefferson was the primary writer of the Declaration of Independence.  He said, “A majority is one man with courage.”

Please join us in our efforts.  Just as the colonists were subjects of the King of England, the income/payroll tax system makes us subjects of the Ruling Class and their minions in DC.  The patriots of 1776 freed themselves from the tyranny they were under.  We can do the same today.


HAVE A WONDERFUL 4TH OF JULY!!